Intersection of Money and Politics in Local Governments

The “Bad & Ugly” Art of Purchasing a Contaminated Property – Part 1

PART I OF THE 2-PART SERIES – The “As is, Where is” Provision in the Contract

The Town of Herndon purchased the Ashwell property (the Property) last year, because it had considered it vital to the development of the downtown. The purchase is a prime example of how not to make decisions. It also illustrates a pattern of behavior (on the part of town officials and the majority of the council) that disrespects our town charter and harms our welfare. It erodes checks and balances inherent in the Town charter and prevents examinations of potential waste and fraud. In this case alone, the mayor’s “rush to development” would cost the town at least $800,000 right off the bat.

The series shows that time and time again, the Town Manager and the Mayor:

Often, sadly, the majority of the councilmembers were just happy to accept whatever information the Town Manager and the Mayor had provided to them and accept whatever conclusions the TM and Mayor had reached. The information was often given either at the last minute (therefore, decisions had to be made under the threat of unreasonable deadlines) or after the decisions had already been made. The small minority, though, had to fight to receive them in advance.

This pattern of behavior has been and is being repeated often. For example, even though the Town received financial information pertaining to two downtown development proposals on February 19th, the councilmembers are likely to see the Town Manager’s analysis on April 5th, when they will be asked to make decisions about moving forward. The TM has already declined a private as well as a public request to provide the documents in advance.

ONE IS TEMPTED TO ASK, “WHY DO WE EVEN HAVE THE TOWN COUNCIL?”

The presentation of the issues, this case illustrates, begins with the discussion of the “non disclosure” of the left-over contamination from the 1990s.

A. NOT DISCLOSING THE “RESIDUAL” SITE CONTAMINATION

While removing underground petroleum storage tanks from Ashwell’s property in 1990, workers discovered extensive contamination of soil and groundwater. A specific area in front of the former auto-repair shop was never remediated, even though it had been recommended for corrective action in 1990 and 1992; that is, the contamination was left in place. In addition, the soils underneath the repair shop were never investigated.

The following excerpts from two orders of the then Virginia State Water Pollution Control Board (VWCB) document that the area of concern had not been remediated.

Under the direction and orders of the VWCB, the investigations had started in 1988 and continued until at least 1994. After the corrective actions had been completed, the site had been monitored (for free-phase petroleum, but not for dissolved groundwater contamination or soil contamination) until 2004.  Click to read a brief History of the Environmental Contamination and VWCB’s Orders.  Take a look at the Chronology of Past Investigations of the Ashwell Property.

Town officials knew about these facts, because the Town was a partner with Ashwell in the cleanup of the property in 1994[1]; yet, not a word about the residual contamination was mentioned to the:

Let us forget the left-over contamination from the 1990s for the moment, the Town Manager and the Mayor, as the following section shows, were highly resistant to providing the appraisals to the councilmembers in advance of their meetings.

B. NOT PROVIDING THE APPRAISALS TO COUNCILMEMBERS AND THEN LIMITING THEIR DISCUSSION

HIS FIGHT CAME TO NAUGHT WHEN AT THE NEXT CLOSE DOOR MEETING, THE MAYOR DID NOT ALLOW HIM TO PRESENT HIS VIEWS

– views that might have swayed others to lower the low and high ends of their selected ranges. The majority did what it wanted to do all along – set a high enough range to come close to Mr. Ashwell’s asking price. Click here to read the blogpost.

The Property was also the subject of an environmental investigation in 2007 by JPI Development Services. The appraisers could have used the estimates of the costs of remediation given in the Phase II report (of this investigation) to calculate the reduction in appraised values, but were not given a copy of this report. It appears the Town did not even tried to obtain it before 2013.

C. NOT MAKING THE “AS IS, WHERE IS” PROVISION A SEPARATE (AND VISIBLE) CLAUSE OF THE CONTRACT

Mr. Ashwell agreed to a much lower figure of $3.519 million than his asking price. In hindsight, there are two potential explanations for this acceptance by Mr. Ashwell. The First explanation is that Mr. Ashwell still had a thing or two up his sleeve. Rather than caving in, he had planned to insert the following provision (The Provision) in the contract:

“The Town shall buy the Property from Seller in its “as is, where is” condition as to the improvements on the Real Property with all fault and without any warranty, express or implied as to the condition of the Property …” (Called “As is, Where is” provision or The Provision in the rest of the article)

While, the Town may have ignored the residual contamination, Mr. Ashwell did not. He was very familiar with the past investigations and knew that it would cost a considerable sum to remediate the site. The contract, with this provision, was worth about $4.5 million (and thereby a lot closer to his asking price). Under this scenario, it would appear that he had beaten the Town to the punch.

The second explanation for the acceptance of the low figure is that both parties had verbally agreed that the Town would buy the property “as is”. However, due to the sensitivity about paying too much, the Mayor, the TM and the Town Attorney decided to not tell the Council about it. No one will never really know what happened then (unless one examines the Town Attorney’s notes of the meetings), but

WE DO KNOW THAT THE THREE OF THEM NEVER MENTIONED THE “AS IS, WHERE IS” CONDITION AT ANY TIME,

even though they had many opportunities to do so as discussed in the Section D of this part and Part 2 of this series.

Further, to avoid or minimize any controversy that might arise, Ashwell either agreed to insert or inserted on his own, the “As is, Where is” provision not as a separate clause, but as a bland sentence in the introductory part of the contract. Those interested in scanning the primary clauses (most of us) would certainly miss it. Miss it, they all did. No member of the public or the council raised any questions at the subsequent Work and Public sessions.  Take a look at the Ashwell_Property_Contract (the Contract).

4. NOT DISCLOSING THE “AS IS, WHERE IS” PROVISION DURING PUBLIC PRESENTATIONS

Former Town Attorney, Richard Kaufman was the first person to discuss the contract. While he meticulously discussed every clause in the contract during the Work Session on May 19th, and the Public Session a week later, he did not mention a word about the “as is, where is” warning.

Duties of the Town Attorney: Under the Town Charter, the Town Attorney is the “legal advisor of (1) the council, (2) the town manager, (3) all departments … in all matters effecting the interest of the town…” Therefore, the council, not the mayor, is his legal “client”. In this case, as in all other cases, he was supposed to proactively and meticulously inform the Council about any matter that might affect the town. He is supposed to prepare his presentations (to the council) by assuming that councilmembers might not read a contract fully. Obviously, he failed to do his duty, in this regard.

Mr. Kaufman was a very careful attorney, but he often mentioned that the Mayor was his boss. I believe he was wrong. Consider the following:

Duties of the Mayor: Contrary to commonly held beliefs, but in accordance with the town charter, the mayor “…shall preside over the meetings of the town council and shall have the same right to speak and vote therein as members of the town council. He (she) shall be recognized as the head of the town government for all ceremonial and military purposes…” (Emphasis added)

THE TOWN ATTORNEY SHOULD HAVE TOLD THE MAYOR THAT HE HAS A DUTY TO PRESENT THE “AS IS, WHERE IS” PROVISION TO THE COUNCIL.

After-all the council, not the mayor, was his legal client.[2]

The record shows that the town attorney, the town manager, the mayor and the outside counsel discussed the “As is, Where is” provision extensively before agreeing to the contract. The outside counsel advised the Town to ask for an inspection period of 90 days and reserve the option to walk away from the contract at a later date. No one will know why he did not advise them to withhold signing the contract until all appropriate environmental investigations had been completed. Perhaps, he knew that the Mayor wanted to move ahead without delay.

Why the Mayor and the Town Manager could not wait a few months to do the investigations first, develop the facts, inform the council, and obtain its advice and consent is beyond comprehension. It was not as if another deal was waiting in the wings for Mr. Ashwell. The best offer he had reportedly received was only $2 million. Perhaps the real reason for moving forward was to “start” the development of the downtown before the election in 2016.

With great fanfare and publicity, the Mayor signed the $3.519 million contract on or about June 9th, 2015. There are good reasons to believe that the councilmembers and the public had no idea that it was an “as is, where is” contract. And, the Mayor, and the Town Manager were not about to tell them either, even after the discovery of the contamination. Their unwritten “job” was to ensure the council would approve the contract. How they did it, is the story of the 2nd Part of the 2-Part series. 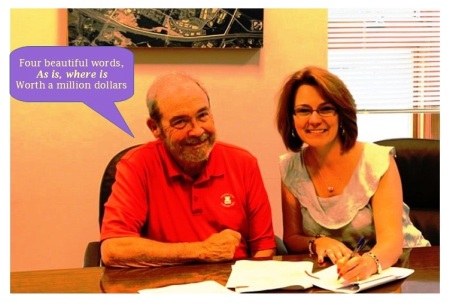 [1] The VWCB had repeatedly ordered additional subsurface investigations of the Property. However, before the remedial actions could be approved, the Town expressed its desire to install a storm-water culvert through the Property. When the Town (and the County) became a partner in the cleanup, only the areas affected by the excavation for the culvert were cleaned–up. The adjacent contaminated areas were left undisturbed.

[2] Perhaps, the Town Manager provided the lead to the Town Attorney in this matter. The TM’s remarks in the August 26th meeting suggest that he did not believe that the site contamination was of material importance. He may have advised the Town attorney to not be concerned about the contamination.

According to the Charter “…it shall be the duty of the town manager to (a) attend all meetings of the town council, with the responsibility to counsel and advise but with no voting rights; (b) keep the town council (and, not a part of it) advised of the financial condition and the future needs of the town and of all matters pertaining to its proper administration… and make recommendations…” (Emphasis added). Accordingly, the TM’s primary responsibility is to keep the council informed fully at all times. If the TM had advised the Town Attorney to withhold any information from the council, the latter should have declined the advice.

You are currently reading The “Bad & Ugly” Art of Purchasing a Contaminated Property – Part 1 at Herndon Opinion by Jasbinder Singh and friends.